Dimmer Switches work by reducing the power delivered to your light bulb.

They do this by trimming a section of a waveform, either on the leading edge or trailing edge of the wave.

Manufacturers have designed their LED light bulbs to be compatible with the majority of common ‘trailing edge’ household dimmers. Trailing edge dimmers are slightly more complicated and more expensive than the ‘leading-edge’ versions but they have many more desirable features such as smooth control, silent running, soft start and multi-way dimming that greatly enhance the life of the LED light bulbs. For a more comprehensive rundown of dimming and dimmer switches in general, check out our Dimming for Dummies guide.

How Do Trailing-Edge And Leading Edge Dimmers Work? 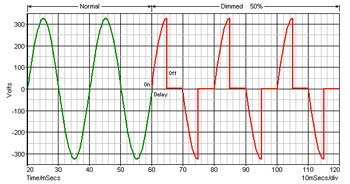 Trailing edge dimmers are designed to fade the voltage to zero rather than switch it abruptly off, by applying resistance to create a ramp. This increases the amount of heat dissipated since the resistive period generates heat. 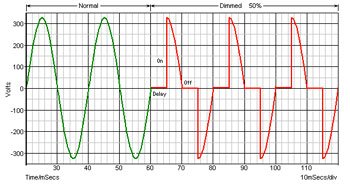 Predominantly used with incandescent or mains halogen light bulbs, leading-edge dimmers are compatible with resistive or inductive loads and can reduce the load by shortening the cycle at the leading edge of the input waveform.

How Many Light Bulbs Can Be Used With A Dimmer?

All dimmer switches have a minimum and maximum rating (Watts). Unfortunately LED loading cannot be calculated the same way as a traditional incandescent or a mains halogen light bulb. A good rule of thumb to apply – one that is used by most manufacturers – is to take the maximum rating of the dimmer switch and divide by 10 (or in other words use 10% of the max. rating). As an example – if you have a dimmer switch with a maximum rating of 400W (rule of thumb translates to 40W) you can run five 7.1W dimmable LED light bulbs (see example below for further explanation). 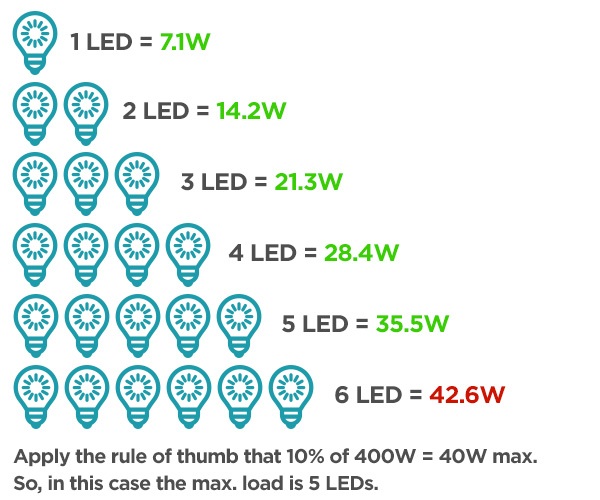 It is worth mentioning at this point that all manufacturers state that their LED light bulbs are designed to be compatible with the majority of common household dimmer switches but they cannot 100% guarantee that they work with them all as there are so many makes and models on the market today.

There is a rule when calculating LED wattages that which is W*10. So for your concern, 29*7*10 = 2,030W which is very large. You would need to find a dimmer which can cope with loads above 2,030W. This would require a very specialist dimmer (that we don’t sell). I think the best advice would be to consult an electrician.

I have a much smaller situation. I’m just connecting under counter lighting in a kitchen using Kichler LED lights, and the lights flicker when we dim them. The whole house has push button switches which is also challenging to find what will work with the LED fixtures. I’m afraid that I need to find a lighting engineer. Please help!

Most LED lighting manufacturers test which dimmers their lights work on. Flickering is a typical side effect of a dimmer switch that is not compatible with the lights you are using. I’m afraid there is no easy workaround to solve this apart from requesting from the lighting manufacturer which dimmers they recommend, and then installing these dimmers into your lighting circuit.

l have 7x 50watt halogen street lamps and want to dim them, any suggestions?

You could do this on a standard dimmer switch, so long as it’s maximum load for halogen exceeds 350W – there are many 400W dimmers available if you do a quick search online.

Is the LED Driver dimmable?

Hi Matt: In using a universal slide dimmer switch the manufacturer list the maximum rating Watts as follows: for dimmable LED/CFL 150-Watts; for Incandescent/Halogen 600-Watts. Would you still require the 10% rule in calculating the number of dimmable LED light bulbs given the manufacture makes the distinction between the maximum wattage for the different types of bulbs? If you use the dimmers LED maximum watts as 150W, then the following would be true: I have a light fixture requiring 6 bulbs. The dimmable LED bulbs are 7.1W per bulb. Therefore 6 LED dimmable light bulbs X 7.1W each = 42.6… Read more »

I don’t think you need to use the 10% rule in this case as the dimmer switch states a rating of 150W. So you should be able to add up to 150W of LED bulbs onto the dimmer.

DO NOT listen to Matt’s (10% rule or multiply by 10 rule for LEDS). He is completely wrong. It would make more sense if it’s 150w dimmer and you only want to use 80% of the dimmers maximum watts as the same goes for circuit breakers 20a breaker your load should only be 80% of the 20amp breaker.

What would be the most likely reason i experience ghosting( led bulb barely on still in OFF position when using a lutron pd-5ne dimmer—-whether in reverse or forward phase mode when using these bulb: E12 LED Bulb Dimmable 7W C7 Bulb Equivalent to E12 Halogen Bulb 60W, Warm White 3000K T3/T4 Base 120V. I am using two of these bulbs in 2 wall sconces—replacing 120 volt T4 halogen bulbs. Other dimming functions are fine—no flicker, no humming just ghosting.

The most common reason we have found this is induced voltage generated from another power line in your lighting circuit. Briefly put, the magnetic field generated by running electricity through a cable, can create a small voltage in another nearby cable. As LED’s require such low power to run, this very minute voltage is enough to light the LED a tiny bit. I’ve heard solutions ranging from putting a small resistor into the lighting circuit, or using sheaved cabling – but I would strongly advise you consult an electrician about this issue. I experienced this exact same problem when I… Read more »

Hi, I would like to use some GU10 bulbs on a 110 volt supply. I know that some GU10 Bulbs are rated 85 to 340 volt as I have had them in the past but cannot find them anymore It seems as if the manufacturer says that they will only work on 230-240 volt yet I have tried them and they work on 110 as well. Do you know why they would work on this voltage? Is it because they are non dimmable therefore will work on any voltage within reason? Or obveresley that they are dimmable and will work… Read more »

How to install a 1 lever dimmer?

I have 4 6watt led lights connected in a roll do they make a dimmer for that small of wattage of led lights?

Our Varilight dimmer switches are rated from 0W upwards when used with LEDs. So they will be suitable.